Bowmunk (バウムンク) is a Menyokki Robopon Uberhero first introduced in Patapon 3. Deviating from the destructive Destrobo, Bowmunk provides ample support by aiding his allies and bolstering the strength of allies structures during VS play. While not the most powerful combat unit, he is notably the only Taterazay-class unit that can heal his teammates and can even place giant boulders to serve as shelter against enemy attacks.

Bowmunk initially sports a yellow-green mask in the form of a Menyokki Rarepon and wears a sky blue cape by default.

Bowmunk is at level 10 when unlocked, which is when Guardira and Taterazay both reach level 10.

Bowmunk can be equipped with:

"The Tree of Tranquility and the power of nature nurtures your allies and heals their HP."

During Freaky Tree, Bowmunk summons a large intangible spirit tree that gradually heals all allied units within range. Freaky Tree's healing rate is affected by Bowmunk's attack power and attack speed. Bowmunk will remain in place for the duration of the Uberhero mode. Unlike Pingrek's Healing Chateau, Freaky Tree cannot be damaged and will last as long as Bowmunk keeps the combo going.

Bowmunk can equip up to three Set Skills. At level 20, he can equip another Set Skill, for a total of four. 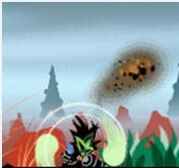