Cannogabang is a Gyaba Uberhero first introduced in Patapon 3. Carrying a firearm of massive proportions, Cannogabang unleashes devastating firepower from the backlines, tearing through crowds and terrain alike. With a cannon, he can demolish structures and forts with ease. Using a howitzer, he can scatter lethal shrapnel across the field to damage all enemies within range. Utilizing a laser, he can mow down entire armies with a single shot, piercing any and all defenses.

Cannogabang is at level 12 when unlocked, which is when Yumiyacha and Alosson both reach level 12.

Cannogabang initially sports a light blue mask in the form of a Gyaba Rarepon and wears a dark blue cape by default.

Cannogabang can be equipped with:

Uniquely, Cannogabang's Uberhero mode cannot be kept in a combo and will end immediately after it is activated. The only way to combo his Uberhero Mode is via Soragami's Sutra.

During Slinger, Cannogabang charges up to fire off a single powerful burst with his firearm. The effects of Slinger is dependent on Cannogabang's weapon.

During Cannon Slinger, Cannogabang launches a giant glowing cannonball that causes incredible damage and tears through anything in it's path. The drawback is that the cannonball can often fly over smaller and shorter targets, making it ill-suited for close-range enemies.

During Howitzer Slinger, Cannogabang blasts 10-12 pieces of flaming shrapnel onto foes that pierces all enemies, dealing high damage across a wide range. It is arguably one of the most powerful Uberhero modes, especially when used at close range against a single target.

During Laser Slinger, Cannogabang briefly unleashes a searing laser beam that causes massive damage, hitting all enemies on the ground within a huge range. Cannogabang will also swing the laser up at the end, hitting all airborne enemies and taller enemies a second time.

Cannogabang can equip up to four Set Skills. At level 20, he can equip another Set Skill, for a total of five.

Cannogabang with the Euryalus Howitzer. 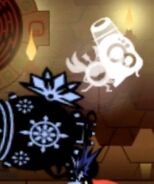 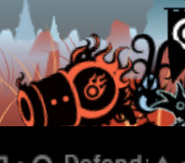