Gigantus is a boss introduced in Patapon 3. He is only naturally bested by Gigante King, who is bested by Terantus, a DLC boss. Gigantus is the third-tallest boss in the series, but his older cousins are the second and first. The combined form for Gigantus' family is "Gigante".

Gigantus' size is visually impressive. His size also gives his attacks incredible range, most of which can devastate your army in a single hit. The fight begins with the Gigantus standing straight up. After the player attacks his legs for a while and dealing a certain amount of damage, he will bend down and the fight begins. He appears in the rare mission "The Legendary Gigantus" in the Field of Angry Giants. Gigantus is probably starving due to lack of food, as his ribcage and some of his bones are visible

Gigantus will rise up and lift his sword high into the sky. The camera will follow him and stay fixed on his face and arm for about 4 beats, which will give you just enough time to strike one command. He will then smash his sword down onto your army. If you're far enough away, you can dodge this with PonPata, but due to the size of his sword, this is unlikely. Defend with ChakaChaka at all cost .

Possibly his most feared attack, many players have fallen victim to the Gigantus's body slam. He will take a step back, and then stand up, only to throw himself onto your army. Most players don't recognize this as an attack at first, and are completely caught off guard when he strikes. This attack can only be dodged if you are far enough away from him, as he will use the entire length of his body to crush you. Defend at all cost, as this attack can kill your entire team in a single hit.

This attack doesn't do as much damage as the first two, but it has a high critical ratio, so using DonDon is advised. Gigantus will take a step back, stab his sword into the ground behind him, and then rip it out, moving forward and up, also producing a shockwave that travels along the ground. If you're far enough away, you can jump the shockwave, but if you're too close, the sword will hit you as he uppercuts, so it's easiest just to defend against this attack, as it doesn't deal terrible damage. This attack can be totally blocked by Guardira's Hero Mode.

This is probably the only attack of the Gigantus that can be easily dodged. Evade with PonPata, or even DonDon. The Gigantus will lift his foot up into the air, and then attempt to crush your Patapons with it. This attack isn't lethal, but it can deal considerable damage, but you won't be devastated if you forget to evade, defend, or miss a beat.

When fighting the Gigantus, it's advised that all your Patapons are at least Lv. 10, otherwise they won't do enough damage to actually hurt him. Make sure to defend against or dodge his attacks, or you'll find yourself defeated quicker than you may like. Keep in mind that he is classified as a Giant, so weapons like 'Gesundbeit' and Romolus Halberd will do extra damage against him. He is somewhat easy to stagger, and even easier to poison and put to sleep. Ranged Heroes, like Yarida or Wondabarappa work best against him. Just like any boss in Patapon 3, Gigantus will begin to attack very rapidly once weakened so defend at all cost. There is a warning for this, he will roar at your troops, letting you know he is about to attack quickly. 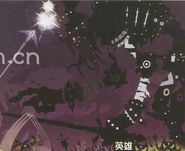 Gigantus from the Patapon 3 screensaver