Gluttonous Buzzcrave is one of the seven Dark Heroes introduced in Patapon 3. He is the fifth Dark Hero encountered in the story mode and is considered the counterpart to both Kibadda and Pyokorider for his highly aggressive horseback combat style. Unlike the two Uberheroes, Buzzcrave can equip pikes to drastically increase his range and damage, allowing his to skewer entire crowds with ease.

Buzzcrave sports a purple mask in the form of a fly's head with antennae, large yellow eyes, and mandibles, and wears a purple cape by default.

Buzzcrave is linked to the Archfiend of Restraint and represents the Deadly Sin of Gluttony, which is the reason he looks like an insect. He frequently talks about devouring his foes, and is seen talking about eating a couple more of Zaknels and chewing on a Cyclops when he challenges the Uberhero.

Before becoming a Dark Hero, he and Slogturtle were once royal knights that served Prince Sonarch and King Ighl, which explains the reason why he calls the Uberhero "Sir," and his very formal way of speaking, especially to Sonarchy. In the last cut scene, Buzzcrave tries to help Sonarchy against Miss Covet-hiss, jumping in front of the prince while requesting him to escape. Sonarchy stays, however, and requests Slogturtle to take Buzzcrave and flee quickly from the place.

Buzzcrave is the fastest Dark Hero while in Dark Hero Mode. One of his Class Skills is the same as one of Kibadda's. When in battle, he says "No one can escape. I shall devour all!".

Buzzcrave can be equipped with:

"Summon 20 flame flies which seek out their targets and dive-bomb like angry torpedoes."

During Burning Fly, Buzzcrave summons 20 flaming flies that rain down in a barrage of small explosions. The flies inherit the properties of Buzzcrave's weapons, meaning can freeze opponents if a ice-based weapon is used. Using a piercing weapon, such as Dokaknel's Fang, will allow the flies to pierce structures and enemies.

Buzzcrave can equip up to four Set Skills. 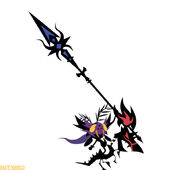