Grenburr is a Mogyu Uberhero first introduced in Patapon 3. Grenburr trades all of his defense for pure offense, cleaving entire armies in twain and inflicting massive damage against larger opponents. Although he lacks any defensive equipment, he has the highest stamina of all the classes, which can be further boosted depending on his weapon.

Grenburr initially sports a light purple mask in the form of a Mogyu Rarepon and wears a red cape by default.

Grenburr is at level 12 when unlocked, which is when Taterazay and Tondenga both reach level 12.

Grenburr can be equipped with:

"Leap up high, spin in the air and descend on foes with a great swing of a giant weapon. Major damage!"

During Guillotine, Grenburr moves forward, leaps high into the air, spinning, then brings his weapon down into the ground, devastating those unfortunate enough to be below him. He then returns to his initial position and repeats the process. While Guillotine can cause massive damage, Grenburr himself can be interrupted by status effects, such as being ignited by a Lava Salamander.

As with all Class Skills, each skill requires 100,000 experience to master. The amount of experience gained is dependent on the skill. If Grenburr is an Uberhero, his Class Skills will be inherited by Cannassault.

Grenburr can equip up to four Set Skills. At level 20, he can equip another Set Skill, for a total of five. 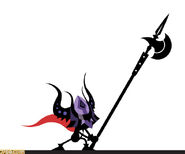 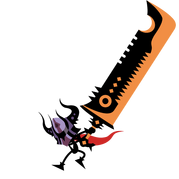