Jamsch (ジャムシュ) is a Mashu Megapon Uberhero first introduced in Patapon 3. Like Wondabarappa, Jamsch utilizes sound waves to disrupt and disorient his opponents with a wide array of status effects. While his attack power is rather low, his ability to debilitate entire crowds with ease makes him a valuable unit for crowd control. With a twinhorn, Jamsch can drown the battlefield in cacophony of crippling sound waves.

Jamsch is at level 10 when unlocked, which is when Wondabarappa and Oohoroc both reach level 10.

Jamsch initially sports a red-orange mask in the form of a Mashu Rarepon and wears a green cape by default.

Jamsch can be equipped with:

"Fire poisonous spores into the sky to inflict poison damage on all foes. Destination determined by wind."

During Airborne Threat, Jamsch produces billowing clouds of poisonous spores to flood the battlefield, passing through enemies and terrain. Enemies within the field take persistent damage and are constantly afflicted by status effects, most commonly sleep and poison. The spores are highly influenced by the wind, and the rate of which Jamsch produces the clouds is affected by his attack speed.

Jamsch can equip up to three Set Skills. At level 20, he can equip another Set Skill, for a total of four. 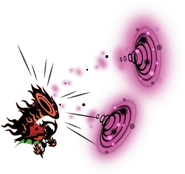 Jamsch equipped with a Flame Horn and a Fire Cape.

Kan as a Jamsch.
Español
Community content is available under CC-BY-SA unless otherwise noted.
Advertisement