Kacheeks are one of the main animals that the Patapon tribe hunts. They are stout, boar-like creatures that inhabit a wide variety of habitats, ranging from plains and deserts to swamps and mountains. Because of this adaptability, Kacheeks appear in almost every hunting mission of both Patapon and Patapon 2.

In addition to being the most common and adaptable prey animal in the Patapon world, Kacheeks are also one of the easiest animals to hunt. They are peaceful and, unlike Motitis, dull-witted, only aware of the Patapons' presence when either hit the Kacheek with a weapon or when a Patapon literally walks right behind it. When startled, Kacheeks grunt and move away a short distance before returning to their grazing, allowing hunters to easily keep pace and wear them down.

Kacheek meat is hard and somewhat unappetizing, only consumed by Patapons because of its abundance and nutritional value (young Patapons soon learn that "If it fills your stomach, don't complain"). Additionally, their hides and fangs can be used for tools, weapons, and equipment. Some subspecies of Kacheek even relinquish valuable ores or wood when slain, possibly because they consume the materials to help digest their food.

Strangely, several other animals in the Patapon world imitate Kacheeks when idle, such as Gancheeks, Parcheeks, and Poocheeks. These creatures appear as oddly-coloured Kacheeks until harmed (Whether it be from a Patapon or from the environment), at which point they reveal their true forms - and in many cases, go on the offensive. The true purpose of their disguise is unknown, although it is likely that they do so to get close to their prey (either Patapons or the Kacheeks themselves) or for protection in packs.

Like many other creatures, Kacheeks make a cameo in Patapon 3 as drawings in the Hideout. 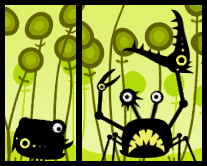 Revealed Picheek
Add a photo to this gallery
Retrieved from "https://patapon.fandom.com/wiki/Kacheek?oldid=91619"
Community content is available under CC-BY-SA unless otherwise noted.