Madfang Ragewolf (「ぶちぎれファンギル」?; Buchigire Fangiru) is one of the seven Dark Heroes introduced in Patapon 3. He is the first Dark Hero encountered in the story mode and is considered the counterpart to both Destrobo and Bowmunk for his destructive close-combat potential and self-preservation abilities. He can exclusively equip claws, which bolsters his stamina, critical and status rate, and resistances.

Ragewolf sports a reddish brown mask in the form a wolf's head with yellow eyes, and wears a navy cape by default.

Of the Seven Deadly Sins, Ragewolf represents Rage, and thus is linked to the Archfiend of Valor. In-game, he harbors a burning hatred for the Uberhero and the Patapons. He seems to be partnered with Naughtyfins and has shown affection towards her, on numerous occasions attempting to kill Uberhero in order to keep her safe, even setting aside his grudge with the Patapons to aid her when she failed.

Ragewolf is often aggravated by his companions, as in "Bird or Beast? Offense or Defense?", when he was irritated by fellow Dark Hero Standoffish Sonarchy. Unlike the other Dark Heroes that tried to protect their respective Archfiend, Ragewolf showed indifference to his ties to the Archfiend of Valor.

He always seems to be interested in Ancient Superweapon Org] and Superweapon Dahl. Org is located in the third floor of the Labyrinth of Restraint and Dahl on the eighth floor (Third floor of Depths of Gluttony), where he mounts it to fight the Patapons.

Ragewolf recovers some of his memories at one point. Sadly, this event leads to his downfall. After the player completes one of the quests after defeating the Archfiend of Adamance, the Dark Heroes find out about Ragewolf recovering his memory and Miss Covet-Hiss along with Standoffish Sonarchy command Slow-moving Slogturtle] and Gluttonous Buzzcrave to kill him, resulting in Ragewolf's death at the hands of his comrades.

Ragewolf can be equipped with:

During Drill Punch, Ragewolf rushes up to the nearest enemy and delivers a single powerful strike, then retreats a short distance, only to strike them again with his other arm, then repeats the process. Ragewolf gains immunity to Knockback and Stagger while his Dark Uberhero mode is active.

Ragewolf can equip up to four Set Skills. 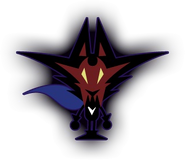 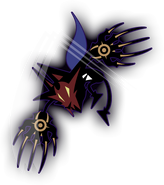 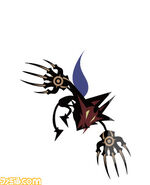