Myamsar is a Fumya Dekapon Uberhero first introduced in Patapon 3. Like Tondenga, Myamsar has superb offensive and defensive abilities. Using a pair of weapons instead of a weapon and shield combo, he can deal extreme amounts of damage in bursts against single-targets. Myamsar is considerably faster than most Taterazay-class units and can perform hit-and-run tactics to whittle down even the toughest of enemies. Alternatively, he can rush in and tear down his targets before they have a chance to retaliate.

Myamsar initially sports a light yellow-orange mask in the form of a Fumya Rarepon and wears a light green cape by default.

Myamsar is at level 8 when unlocked, which is when Tondenga and Destrobo both reach level 8.

Myamsar can be equipped with:

During Sic 'Em Shadow, Myamsar enters a trance, seeking out the closest enemy within range as indicated by a purple aura surrounding the target. After a brief moment, the target is immobilized, tumbled, and Myamsar teleports to them to unleash a ruthless flurry of strikes. He will continue to strike until the target is defeated or the Uberhero mode is canceled. Like Tondenga's Giandeth, Sic 'Em Shadow will always strike at the same rate, regardless of Myamsar's attack speed.

If Myamsar cannot reach the target he is locked onto, he will teleport it to him instead. Sic 'Em Shadow has no effect on large enemies such as Cyclops or Balrog and will only target small foot soldiers. 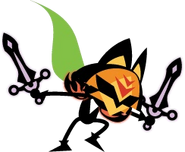