Patapon is the first game in the series, focusing on the Patapons' war against the Zigotons and their search for Earthend.

Considered a hybrid of both music and Real Time Strategy games, Patapon is a PSP game which focuses on the control of an army of small, cyclopean creatures through a series of brightly-colored, silhouetted, 2D scenarios. The only HUD present in-game is the health bar of your Patapon squads and the "help" option which shows all of the commands you have unlocked; there isn't such a thing as a cursor or control panel. Instead, the actions of the Patapons as a group are determined by a series of 4 beats, in-tempo with the background song. Each of the 4 face buttons represents a drum; the combination of these sounds create orders for your army to follow, such as "advance", "attack", "defend", and so on. Efficiently giving out orders to your Patapons without missing a beat will lead to them entering Fever Mode, during which they will become stronger and faster, as well as gaining new attacks. This Fever mode becomes increasingly necessary as the game progresses.The game also has several minigames to let you improve your army (all of them rhythm-based) and several RPG elements, letting you customize your Patapons with the stronger weapons you can find, etc.

The Patapons are a tribe of warriors that were undefeatable by any foe when fighting alongside the drums of their god, the Almighty. They resemble a walking eyeball, with round black body dominated by a single eye, tiny limbs, and a cap or helmet on top. The game leads them through their world, hunting, fighting, and always searching for their one goal, "IT", which they desire to look upon and gain eternal contentment. On the way, they clash with their enemies, the Zigoton Tribe. The Zigotons are squarish, red-eyed beings whose armies seek to hold the Patapons back on their quest. Their leader is Queen Kharma, and their forces are led by Gong the Hawkeye.

Once upon a time, the Patapon Ancients were near-invincible warriors, powered by the drums of their god. With the power of their Almighty on their side, no enemies were too numerous, monstrous, or powerful for them to defeat. But that was long ago, for the evil armies of the Zigoton Empire have driven the Patapons from their home, a shadow of their former glory. But the Almighty one has returned, and the Patapons again gain the strength to fight their oppressors. and at last find Earthend and "IT".

The Patapons begin a campaign to find "IT", battling both Zigoton soldiers and ancient guardians of long-lost artifacts from their days of glory. The Zigoton general, Gong, makes repeated attempts to stop them, stating that Zigoton prophecy has foretold a great disaster should the Patapons march again. The Patapons also make a bitter enemy in Makoton, a Yariton who sees his best friend Aiton slain by the Almighty's armies and swears vengeance.

The Patapons advance into the very heart of Zigoton territory, where Gong finally falls after Makoton betrays him. In response, Queen Kharma makes a pact with demons, sacrificing the souls of her army, her generals, and eventually herself in order to gain the power to destroy the Patapons once and for all. Despite this, the Patapons continue to fight to advance toward Eathhend, defeating the remaining Zigoton wariors, including Makoton, transformed into the demon general Scorpiton by a living gate to the underworld, and defeating the empowered Queen Kharma herself.

In the final act of the game, the Patapons find themselves pitted against the source of the Zigotons' power-a terrible, two-faced demon known as Gorl (or Goruru). Even this fiend is no match for them, and the Patapons at last proceed to the coast, where they come upon the rising sun. Curious as to why they are not eternally content despite finding "IT", the Patapons decide that Earthend must be beyond the sea and resolve to find "IT" there. The game concludes by showing Patapons and Zigotons working together to build a boat to cross the sea. 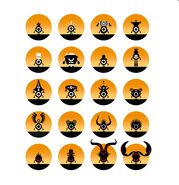 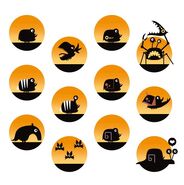