Patapon 2: Don Chaka is the sequel to the original Patapon. In Patapon 2, there is twice as much content, including new weapons, bosses and Patapon units. There is a multiplayer ad-hoc mode where players work together to crack an egg with prizes like masks, Komupons and materials inside.

After the events of the first game, the Patapons are ready to cross the ocean in search for Earthend. Unfortunately, an unknown creature crashes their ship and the patapons lose many of their units. The Patapons come across a new tribe called the Karmen who try to stop the Patapons on their way to Earthend. The Patapon also meet the Hero Patapon, a mysterious Patapon that has great strength thanks to the Masks he wears. This game focuses on the Patapons returning to their homeland, saving the princess, stopping the Akumapons and the Karmen, and their leader, Ormen Karmen.

The Patapon set off out in the ocean with a boat that the Zigotons helped them build. Hatapon remembered an old story and all their troubles to get to where they are now. Hatapon prays to their Almighty to keep them safe on their journey to Earthend. After 49 days and nights after departure, they then meet a kraken-like monster (it's the only time you see it).The Patapons' defenses were useless against it. Afterwards, the monster broke the bottom of the ship. As their ship sank to the bottom of the ocean, their long journey to Earthend ended.

Later, Hatapon is found unconscious on the shore next to the ruins of the boat. Almighty (you) gets a drum for agreeing to be the Patapon God, and by repeatedly making it sound, Hatapon revives, giving the Almighty another sacred drum he managed to hold onto, and teaches Almighty the PataPata song. After three Yaripons join Hatapon (one revived liked Hatapon, two others joined by amazing beat), they soon find Priestess Meden, unconscious, surrounded by the Karmen. The Karmen and the Patapons run from approaching Dodonga, and the Patapons then build a base in a forest made out of rock that looks similarly like Patapolis. The Patapons regroup and once more vow to journey to the Earthend and gaze upon "IT".

Before going to Nanjaro Hills, Meden will say that she senses something important is going to happen. At Nanjaro Hills, they meet a strange Patapon, trapped under two rocks and wearing a mask, called Hero (Default name, you get to name him). After saving Hero, the group is unsure about his mysterious past, which he is unable to recall apparently due to his mask.

As the new Dark One appears, along with Black Hoshipon and Kuwagattan, the Patapons do battle with them until they reach the Karmen Generals, along with Ormen Karmen, the Karmen leader. The battles against the Karmen army rage until only Ormen Karmen is left. In the battle inside Pata-Pole, the ancient Patapon capital city, Hero's mask begins to show, successively, flashbacks of how Pata-Pole was taken over, the Patapon Princess being held hostage, the World Egg shattered by Hero after being tricked by Ormen Karmen and Hero putting on the mask to forget it all.

After Ormen Karmen and the underworld demon Dettankarmen are defeated, the Patapons march forward, seeing a giant egg. They break it, thus rescuing the Patapon Princess from her prison. She is most grateful and, after that, she gives a speech to Hero and points out his new mission, all of which he doesn't hear for being asleep. In the end, the Patapons and Zigotons, along with their new allies, the Karmen, build together a bridge to Earthend.

Patapon 2 retains most of the gameplay aspects of the first game while taking on a few new ones.

An all new Hero unit is introduced. The Hero unit can change his class, with each granting him unique special abilities. These special abilities are activated in hero mode, reached when all 4 beats in a measure are timed perfectly (three measures in hard mode though only two if done consecutively), which can ultimately change the tide of battle. If the Hero unit is defeated in battle, a short countdown leads to his revival.

As well, three new unit classes are introduced: Toripon, Robopon and Mahopon; squadrons fill up at 3 units. Another change is the new level system where the player level ups a unit using materials acquired from missions, thus increasing its stats. This goes along with defeated units' caps being picked up automatically, regardless of location.

New multiplayer capabilities are added, too. Four players send their Hero on a Patagate mission where they take a Mysterious Egg (dropped by bosses), through the egg's respective boss battle to an altar to hatch it. The player that brought the egg gets rewards such as new equipment, Komupons, Ka-ching or Masks to equip the Hero, depending on how well you do in the Donchaka.

Two new minigames are also added, which are accessible in Patapolis. 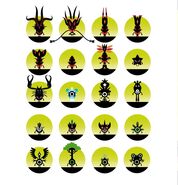 Early Promotional image of Patapon 2, the Patapons are going up against Manboth.

Promotional artwork featuring the Karmen against the Patapons. Hero Mode is also viewed.

Cutout of Hero for Patapon 2

Promotional Image of the Juju Jungle

Early Images of the Karmen

Early Images of Mochichichi, and Manboth

Patapon 2 Opening with a past Hero.

Another Bundle of Patapon 2 and a PSP

Early screenshot of Patapon 2, takes place in the Moakan Desert.