Patapon 3 is the third, and currently, the final game in Patapon series.

Patapon 3 is the third installment in the Patapon series. It focuses on the Patapons stopping the Seven Archfiends and, of course, the Patapons' continued search for Earthend. During their journey, they come across multitudes of enemies and problems barring their path. Will the Patapons finally succeed in locating Earthend?

Patapon 3 begins directly where the previous game ended. The Patapons (with the help of the Zigotons and Karmen) finish the Rainbow bridge and cross the river to a new land. There they find a large ornate chest. Believing that "IT" is inside the chest, the Patapons open it (despite Meden's warnings). Unfortunately, they instead release the Seven Archfiends. The entire Patapon army (including Hero and Meden) is petrified, except for Hatapon thanks to his magic flag. Another Hoshipon called Silver Hoshipon flies out of the chest as well. Silver Hoshipon fuses the Hero's soul with the Almighty, creating the Uberhero. The Uberhero and Silver Hoshipon then rescue Hatapon and restore Ton, Chin, and Kan to their original form. The group takes Meden to the Hideout of the Four Patapon Champions of Lore, where they are introduced to the new shops and features.

Mecha Hoshipon is introduced in a cutscene following a mission called Standoffish Sonarchy and the Perilous Mist; his purpose is apparently to hide a key that activates an ancient superweapon. The Uberhero's army meets Standoffish Sonarchy and they manage to defeat the three Dark Heroes and the Archfiend of Justice. The three Dark Heroes now walk to the Greedy Mask Jungle to seek the help of RottenLee Ravenous, the Dark Hero of Earnestness. Before Uberhero's army catches up with Ravenous, he manages to capture Mecha Hoshipon to find out what the key is. In the mission Duel with Ravenous in Tahi-Tahi Forest, Naughtyfins betrays her comrades by telling the Uberhero what armor is best to surviving the duel with Ravenous. The Patapons defeat the Dark Heroes and then dispel the Archfiend of Earnestness. The four Dark Heroes meet another Dark Hero, referred to as Buzzcrave, in the Bottomless Stomach Desert.

Naughtyfins is taken entirely ill, forcing Ragewolf to withdraw as well. Buzzcrave, Sonarchy, and Ravenous stand at the Oasis of Eternal Slumber. The Uberhero's army defeats Buzzcrave at the Racing Alley of Restraint. Ragewolf takes control of the ancient superweapon, Org, but it is destroyed after intense battling. The Archfiend of Restraint is dispelled and the five Dark Heroes make contact with another Dark Hero referred to as Slogturtle. Shortly after, Black Hoshipon escapes the Underworld without being summoned. He sees Golden Hoshipon and attempts to kill him, but the Patapons arrive in time to save the day. Mecha Hoshipon and Silver Hoshipon arrive as well, and the whole event turns in the World's First Hoshipon Convention. Black Hoshipon then makes a pact with the Dark heroes, saying that whoever battles the Uberhero would be given support. The Uberhero's army braves Hell's Guillotine and defeats Dettankarmen. Naughtyfins is exposed as the Patapon Princess, and she returns to the Hideout with Uberhero. RottenLee Ravenous is also exposed as Gong the Hawkeye, the Zigoton hero, but is defeated at the Savannah of Envious eyes. Ravenous then sends help to the Patapons in the form of a new-and-improved Ziggerzank. Ragewolf is executed by his fellow Dark Heroes shortly after. The final Dark Hero Miss Covet-Hiss, tries to destroy the Patapon army but ultimately fails. The Dark Heroes, now numbering only four, are defeated for good.

At the Tomb of Tolerance, the Uberhero's army faces their hardest challenge as they gain victory over the Seven Archfiends and Arch Pandara. The four remaining Dark Heroes (Slogturtle, Buzzcrave, Sonarchy and Covet-hiss) are exposed as survivors of the ancient Ah-Ooh civilization that was destroyed by the former armies of the Almighty. After discovering that the memories of Slogturtle and Buzzcrave were returned, Covet-Hiss goes into a rage of jealousy and attempts to kill them all. The two Dark Heroes escape when Sonarchy steps in to stop Covet-Hiss. In the end, it is left unknown what eventually ends up happening to the Dark Heroes, but it is presumed by many that Covet-Hiss is dead.

After defeating the Archfiends at the Tomb of Tolerance, Ton, Chin, Kan, and Hatapon are teleported to a strange land. Uberhero is left behind and given one wish. Uberhero wishes to sacrifice himself to save the rest of the Patapons and Meden from their stony curse, and then passes away. Meanwhile, the Patapon Trifecta meets Silver Hoshipon, who reveals that the strange land is actually Earthend. It is also revealed that Silver Hoshipon (who represents Hope) is IT. Silver Hoshipon then fades away and restores Earthend to its original splendour. Meden and the remaining Patapons are unaware that the Trifecta has reached Earthend, and set up a new Patapolis right outside the Hideout. The journey for Earthend, Meden says, would be started a-new. What happens next is unknown, and left to imagination.

There were two demos prior to the release of the full game: a multiplayer beta and an official Japanese demo. Currently, neither are available for download, unless players have downloaded the demos in the past, then they can be re-obtained through the player's history in the PSN store.

A third demo was released at an unknown time in Japan, which is essentially a limited version of the full game. The player can only access the Patapon Training Grounds and Field of Angry Giants, and cannot play multiplayer.

Cover used for the European English version of Patapon 3

4 players engaging in a dungeon quest 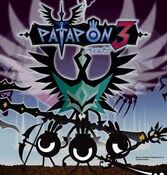 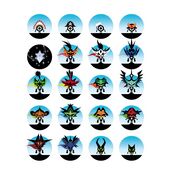