In Patapon Legend, the Almighty uses the power of four magical drums (also known as War Drums) to command the Patapon Tribe through battle.

Playing the drums perfectly will eventually result in Fever Mode being activated, which increases the army's effectiveness. Being in Fever mode is required to activate Miracles or summon Djinn.

The timing leniency in Patapon 2 can be changed by changing the difficulty setting. In Patapon 3, it is by default more lenient than in Patapon 1.

Also known as the Bravery Drum or The Drum of Bravery, this is the first Drum seen in every Patapon game and the most commonly used of all; There are only two command songs that don't use the Pon Drum (the jump song and the miracle/summon song). It is blue and has a circle mouth, it is the thickest drum and the second tallest, being only shorter than Don, due to this, it is slightly straighter than other drums except sides/edges.

This drum is the first to be recovered in all three games, received when the player signs the contract to become the Almighty Patapon. It is used to awaken Hatapon at the beginning of each game, prompting the banner-carrying Patapon to give you the Pata Drum. Its main use is triggering the Attack Song, but it forms an integral part of most commands, usually as the last beat.

The second Drum to be obtained early at both games. Also known as the Strokes Drum or the Drum of Strength, this drum is a red, deep-voiced drum with a square motif, and it is somewhat shorter than the other drums. It is traditionally in the care of Hatapon when the Almighty is not present, but he will gladly relinquish it to the Mighty One when he hears the sound of the Pon Drum. It can apparently make the Patapons fearless indeed. It is said that the Patapons only ever march forwards(Although this isn't true in Patapon 3 multiplayer).

The third Drum to be obtained. Also known as the Roots Drum or The Drum of Wisdom. Despite being a drum, this drum resembles and sounds like more of a green tambourine with a triangle motif and a female voice. It is the shortest drums of all the drums. This drum is usually taken from the boss, Dodonga, and becomes integral for survival against the deadly dragon. 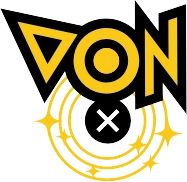 The fourth and final drum to be obtained. Also known as the Verve Drum or the Drum of Miracles, this instrument is hidden in the lair of Majidonga in Patapon and held by Gong in Patapon 2. It is yellow-orange in color, with an X motif and a dull, male voice, and it's the tallest drum than the other drums. It seems to hold unique powers, enabling the Almighty to use miracles (or Djinns in Patapon 3), make the Patapons jump incredibly high, or even heal their status ailments.

Interestingly, it is the only drum that has a command song completely dedicated to itself (and its rhythm is the only one with five beats).

Community content is available under CC-BY-SA unless otherwise noted.
Advertisement