Click HERE if you are looking for a detailed walkthrough on how to obtain the Ton Kampon hat (smithing minigame).

"The rain rarely stops at Manten Gorge, but according to Zigoton legend, when a companion falls to the Patapons, the weather clears, and a magical star appears to grant a wish."

This level is a hunting mission as you can hunt for Cafeteria Meat, Mystery Meat, Dream Meat, and Level 1-3 Alloys. But primarily this mission's purpose is for the player to obtain the Black Star, and finally the Ton Kampon Hat, which unlocks the Blacksmith minigame.

A Thunder Storm is the common weather here at Manten Gorge. But, once the rain stops, a creature called "Picheek" can be found. The Picheek takes the form of a regular Kacheek at the start (Although occasionally, its eye comes out on a stalk). Once The Picheek is out of disguise, it has an oversized beak, and wings.

Close-ranged attackers aren't suggested in this missions since Picheek can hover. Once you have defeated it, a star named Hoshipon (Hoshi means star in Japanese) appears. Hoshipon drops Kaching until the end of the mission. He will also give you a black star that reveals hidden ruins. The second time it stops raining, Hoshipon will drop the Kampon cap. 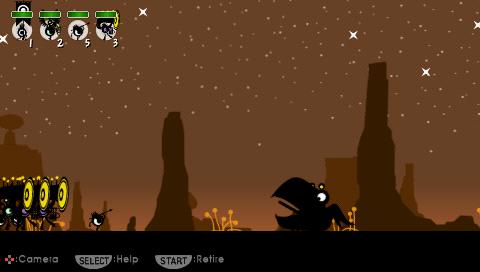 Come back here when it's not raining again and kill Picheek. Hosipon will give you the Kampon Cap along with the usual Kaching and leave. When you come here again, Hoshipon will run out of things to give and only leaves Kaching. (see "Ton Kampon Minigame" page to see full explanation)

After defeating Picheek the 3rd/4th time round (after Hoshipon runs out of things to give) he starts to drop weapons, sometimes he will drop double Kaching instead when you finish taking the missions loot first.

Retrieved from "https://patapon.fandom.com/wiki/Search_for_a_Lucky_Star?oldid=86810"
Community content is available under CC-BY-SA unless otherwise noted.