Slow-moving Slogturtle is one of the seven Dark Heroes introduced in Patapon 3. He is the sixth Dark Hero encountered in the story mode and is the counterpart to Guardira for his defensive skills with greatshields. Like Guardira, Slogturtle holds the frontline using his greatshield to defend against incoming attacks. However, Slogturtle is incapable of using any other equipment, meaning he plays a purely defensive role.

Slogturtle sports a black and green mask in the form of a spiked turtle shell with red eyes peering out from within, and wears a pale green cape by default.

Slogturtle is linked with to the Archfiend of Adamance and represents the Deadly sin of Indolence. He is the oldest of the Dark Heroes and is often seen retreating into his shell or lying down in the ground. He is linked to the Archfiend of Adamance and he will do anything he wants and he ignores doing work. When he talks, he sometimes says "...", showing that he is more of the silent (or lazy) type.

As the story progresses, it is revealed that Slogturtle and Buzzcrave were actually high generals of the ancient Ah-ooh civilization and he actually saved Prince Sonarch before. Apparently, the movement speed of Slogturtle increases as he retreats back into his helmet, as seen from several cutscenes that Sonarchy is actually riding him by standing on top on him while he retreats back into his shell.

When in battle, he says "Neh heh heh! Out of harm's way". He likes warm and dry areas rather than cold and wet areas.

Slogturtle can be equipped with:

During Anti-Magic, Slogturtle manifests a green, turtle shell-like barrier around him to intercept projectiles. All allies within the barrier, including Slogturtle himself, are protected from most status effects and all magic-based attacks, including Fire, Ice, Lightning, Sound, Light, Darkness, and Poison. However, physical attacks, Knockback, and Criticals are unaffected and will damage Slogturtle as normal. Piercing magical attacks will not hurt Slogturtle, but will still harm others if they are inside barrier.

Slogturtle can equip up to five Set Skills. 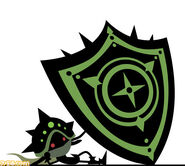