Taterazay (タテラーゼ) is a Tatepon Uberhero first introduced in Patapon 3. He is one of the three parent classes, the others being Yarida and Yumiyacha; the player chooses one of them at the beginning of Patapon 3, each one having separate abilities and attributes. Taterazay is a close-combat class with ample stamina and a powerful defense, capable of fending off approaching enemies and mitigating incoming damage. However, the short range of his sword makes him ill-suited for offensive situations.

Taterazay sports an orange mask and wears a light red cape by default. His default hairstyle is a curved ponytail with three strands.

Taterazay's mask remains the same as he evolves.

Taterazay is revived by Silver Hoshipon and the Almighty, once you play as him you march toward the sound of the Pata Drum where you find Hatapon praying to the Almighty for help, he joins you and you march back towards your petrified Patapon comrades where Silver Hoshipon will revive three Patapon warriors, Ton Yaripon, Chin Tatepon, and Kan Yumipon and he drops Ka-ching on the way. Hatapon will take Meden (still petrified) on the way.

Taterazay is at level 1 when he is unlocked, which is either if the player chooses him at the beginning of the game, or when either Yarida or Yumiyacha reach level 15.

Taterazay can be equipped with:

"An invisible shield protects the entire team. Greatly reduces damage to the team. ~ Combines with other hero skills ~"

During Energy Field, Taterazay raises his shield and envelops the entire team in a protective aura, drastically reducing damage taken. Like the Tatepon Hero's "Energy Field" in Patapon 2, Taterazay remains in a defensive stance and will not attack during his Uberhero mode. If Taterazay is interupted by status effects, such as fire or sleep, the protective aura will cease until he returns to normal. Unlike its Heropon counterpart, units are not made invulnerable to damage and simply take reduced damage. During multiplayer with other Taterazay Uberheroes, multiple Energy Fields will stack multiplicatively; reducing damage taken to a minimum.

As with all Class Skills, each skill requires 100,000 experience to master. The amount of experience gained is dependent on the skill. Taterazay's Class Skills will be inherited by Guardira and Tondenga. If Taterazay is an Uberhero, Kibadda, Piekron, and Charibasa will also inherit these skills.

Taterazay can equip up to three Set Skills. At level 20, he can equip another Set Skill, for a total of four. 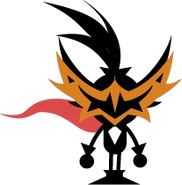 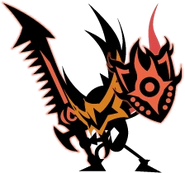 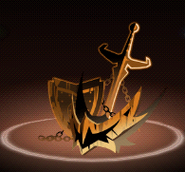 The selection of Taterazay at the start of the game 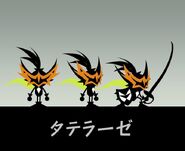 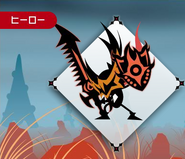