Wooyari (ウォーヤリ) is a Chigyobi Uberhero first introduced in Patapon 3. Breaking the mold of the usual spear-throwing Yaripon, Wooyari specializes in close-combat to strike enemies with his weapons instead of throwing them. However, as a Yarida-based class, Wooyari remains vulnerable due to his lack of defensive equipment, meaning he must rely on a strong offence for a good defense.

Wooyari initially sports a pink mask in the form of a Chigyobi Rarepon and wears a navy cape by default.

Wooyari can be equipped with:

During Flamespin, Wooyari rapidly spins his weapon at high speeds, creating a offense and defensive ring of fire, rapidly damaging opponents and setting objects on fire. With the exception of the Ice Pike, the Ice Lance/Halberd, and Poseipon's Trident, Flamespin will always cause fire damage regardless of the equipped weapon's ignite rate. Enemy projectiles, such as arrows and spears, will be stopped upon impact with the ring. Wooyari is immune to Burn while this is active.

When equipped with an ice-based weapon, Flamespin becomes Frostspin, dealing Ice damage and freezing enemies. Wooyari is immune to Freeze while this is active.

Wooyari can equip up to four Set Skills. At level 20, he can equip another Set Skill, for a total of five. 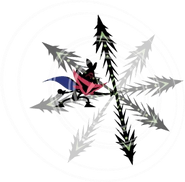 Ton as a Wooyari
Español
Community content is available under CC-BY-SA unless otherwise noted.
Advertisement