Yumiyacha (ユミヤッチャ) is a Yumipon Uberhero first introduced in Patapon 3. He is one of the three parent classes, the others being Taterazay and Yarida; the player chooses one of them at the beginning of Patapon 3, each one having separate abilities and attributes. Yumiyacha is a long-distance class who provides supporting fire for the rest of the team, capable using his bow to pick off distant opponents and inflict various status effects. However, his low stamina makes him incredibly vulnerable should enemies close get too close.

Yumiyacha sports a green mask and wears a yellow-green cape by default. His default hairstyle is a long flick with an 8-pointed star on the tip.

Yumiyacha's mask remains the same as he evolves.

Yumiyacha is revived by Silver Hoshipon and the Almighty, once you play as him you march toward the sound of the Pata Drum where you find Hatapon praying to the Almighty for help, he joins you and you march back towards your petrified Patapon comrades where Silver Hoshipon will revive three Patapon warriors, Ton Yaripon, Chin Tatepon and Kan Yumipon and he drops Ka-ching on the way. Hatapon will take Meden (still petrified) on the way.

Yumiyacha can be equipped with:

Yumiyacha is at level 1 when he is unlocked, which is either if the player chooses him at the beginning of the game, or when either Taterazay or Yarida reach level 15.

"Fire a barrage of arrows into the sky which falls down a moment later and impale enemies, causing heavy damage."

During Meteo Arrow, Yumiyacha fire a volley of large arrows high into the air which rain back down in even greater numbers, piercing all terrain and enemies. The number of additional arrows is equivalent to his highest unlocked Quickshot Class Skill. For example, if Yumiyacha has gained access to Quickshot 3, he'll fire three arrows into the sky, followed by six arrows appearing to deal damage.

Yumiyacha can equip up to four Set Skills. At level 20, he can equip another Set Skill, for a total of five. 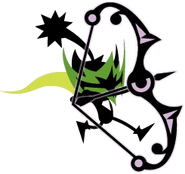 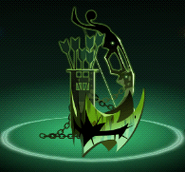 The selection of Yumiyacha at the start of the game 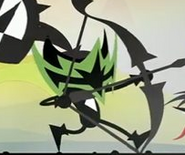 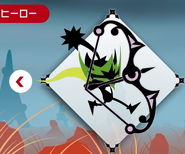 Kan as a Yumiyacha.
Español
Community content is available under CC-BY-SA unless otherwise noted.
Advertisement